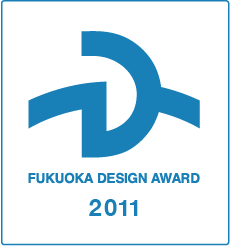 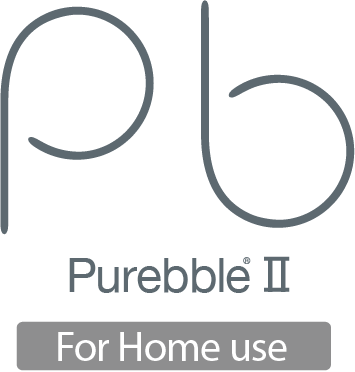 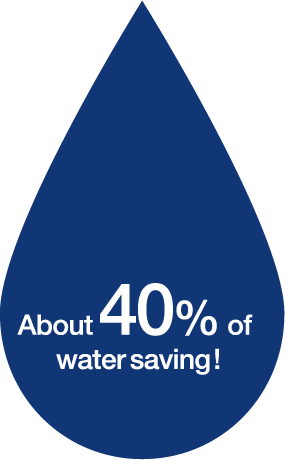 Moderate water pressure stimulate the skin gently and give the massage and relaxation effects.

Purebble II creates tiny microbubbles mildly wash away dead skin cells and excess sebum, and massage your skin with a relaxing effect, which leads to healthy and beautiful skin condition.

Tiny bubbles can be absorb dead skin cells and old sebum, and wash away gently.

20 micron of tiny bubbles which produced by Purebble II absorb and wash away dead skin cells and clean clogged pores.

Which one is more effective, “microbubbles” or “nanobubbles”?

Nano bubbles sounds more effective as it is much smaller bubbles, however, not a matter of its size related to all effects. We have been researched and developed microbubbles and nanobubbles technology for more than 20 years, and we verify that there are most suitable bubble size for different purpose of use. Nanobubbles are very tiny as smaller than micro size and its effect of floating and washing away of extremely tiny dust nearly invisible to human eye sight, which suite for washing something like precision equipment. For microbubbles are suite to wash away the stain of tableware and exceeded skin’s sebum.

Easy to use for everybody
Light & compact body

Made in Japan
All process of technology development
and manufacturing take place in Japan
Trademark Registration No.:5157178

Microbubbles carbonic acid mixer AURA JET AURA JET can be set up not only for family use,
also in hair salons,hospitals and nursing care facilities.

Dissolved carbonate dioxide gas contain in the carbonated spring water, which exist more in European countries. It is used for treatment such as disordered blood vessels, heart and for rehabilitation as well.

Improvement of a blood circulation and metabolism

Filling carbonated water in the bathtub, and enjoy carbonated spring at home. When the carbonic acid touch the skin, the body misunderstand as it gets lack of oxygen condition so take in more oxygen.This causes blood vessels are dilated,blood flow is improved, and metabolism is activate.

Carbon deoxide gas in carbonated water have a feature of sticking on proteins.
By that, it helps to remove dead skin cells, lipid peroxide of the scalp, wastes and clean clogged pores.

Such as sticky hair, itchy scalp and hard to dry hair mostly caused by the left over the silicon on head skin. Shampooing with carbonated water can wash away clogged pore and wastes, and improve your skin condition.

Unique patented technology as we are a specialized manufacturer of Micronanobubbles.Change to carbonated water with one-touch!

It must be used with our official product Purebble, as the effect that we introduced can not be expected with other products.

1.2 ways of Carbonic acid and Air

Switchable between carbonated water and microbubbles with one-touch.

Despite of compact & light body with Φ53×115mm of body size and weight of 303g, capable for produce carbonated water with 1000ppm at once.

The body needs to be set between hose and water faucet, and a carbonated cylinder must be set outside of bathroom.

Since only the water pressure to produce the microbubbles, not require electric power, so failure hardly occurs.

6.About 40% of water saving and economical

Carbonated gas can be fully used up at the end.

Self-setting is possible instead of specific installation work.If you are not familier with the settings, please contact an expart.Due to carbonated spring rather mild acidic, it may discolor or damage thematerial. We recommend for use in acid resistant bathtubs and drain fittings.
The marble surface gloss possibly change to dull. Please use it according to your physical condition.

Comments about warm water
Smooth water touching and unlikely to feel chilly after a bath.
Feeling like having a hot spring.
※Fill the hot water in the bathtub with Purebble II
Other comments
I washed my dog. No dandruff and hair gets glossy.
※Above comments are by product testers, individual results may vary

I feel warm even after the bath.

I thought the price range is a bit high for only showerhead, but I have a pet, and expected baby birth sooner, so we purchased it. After all, it was a good buy.
Good thing is not necessary to change the cartridge.^ - ^

Thinking of running cost, I was looking for non-cartridge type and bought this showerhead. Warm bath effect for winter time, and water saving is keyword. And having bath for my pet. I have a toy poodle and she looks always happy after bathing. What I feel after use this showerhead is microbubble water touching is very soft. It is no need to replacement the cartridge, so I can use showerhead to fill water into bathtub. I will use it for long time.

This is rather expensive product compare to other showerhead. But after checking reviews and it seems last longer if I can maintenance well, not necessary to change the filter as well, so decided to buy this showerhead. I am thinking to use at dog salon. Increasing suffering dogs from allergy and skin disease nowadays, so I use this showerhead to take care of them.

I’ve chosen this product after compared to other company’s products. Not disturbing by noise of showerhead which create when it taking the air from inlet. After drains water from bath tub, it looks clean as well, so I expect my body can be cleaned ! (Female 60s)

I enjoy a microbubble bathing everyday.

It was very easy to change the showerhead. While showering with it, I feel enough water pressure but very mild water touching, and quite comfortable as well. Although reducing shampoo or soap, it said that still have good enough cleansing effect, so it is good for my son with a sensitive skin too.

I bought it for water-saving purpose, because my children play with the water while the shower time.

It was a good buy! More than what I expected.

Setting up was not difficult. Carbonated water bathing solved my problems as my rough heels gets moisturized. Also I had poor circulation, specially on my feet, which caused by air conditioner but no more suffering from it. As for carbonated bottle, it is good that the gas can be used completely at the end.

Great effect of carbonated water for my skin

I had a bad incect bites on my hand & ankle, and applying the steroid cream could not stop my itching. Then I tried to carbonated bathing with the temperature lower than my body temparature and continued to bath for a while. Definetely my condition get improved, even no scars after 2months. Also, I had a small web like varicose vein in my legs but what I found it got thinner after having carbonated bath and it’s gone now. All what I see my calf is a proof of improvement of a blood circulation.